Pre-Industrial Base Malt with a 20 Day Germination

At 20 days this is the longest germination I’ve ever done. I actually wanted to kiln this a couple of days earlier but it was pouring rain so it had to wait. It was already spread out to wilt so a couple of days of wilting is actually more historically accurate anyway.

What I was worried about was mold developing and this did happen on a small handful of grains. Wherever the husk had split, mold grew on the exposed starch and there were also a few pink grains indicating some fusarium mold but not a big deal I just picked them out. 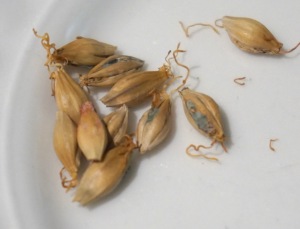 The temperature in the garage couldn’t have been more perfect for the whole 3 weeks with a maximum temperature of 14C. It stayed between 12-14C most of the time. I started with a 44 hour steep changing the water once after 24 hours. If you’ve read my earlier posts you’ll know that an unaerated steep is necessary for a long slow germination. The moisture content was only 40%, slightly less than my target so I weighed enough water to add another 2% and added that while turning over the next two days.

The barley I was using was the 24 lbs. of Chevallier I grew last summer. I lost about three of my beds to animals of some kind, most likely rats or mice and maybe the odd squirrel. This happened only in the beds that did not have the chicken wire support and because they were not supported there was some lodging. When this happens it’s much easier for the critters to access the seed heads. This only happened a few weeks from harvesting. Quite disappointing but it was my own fault for not having enough chicken wire. 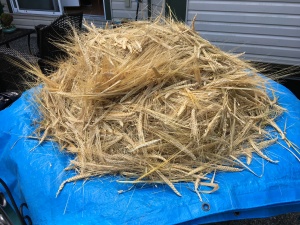 Continuing the drying of newly picked grain at home.

Here’s how the germination went:

I think it could have used another 4 hours at drying temperatures and maybe another 2 at curing temperatures, but this project was pretty exhausting since I didn’t actually know how long it was going to take. At least now I know for next time to set aside a minimum of 24 hours total time for kilning for this amount of malt. Unfortunately, historically this is a normal amount of time for a kiln directly fired and without fans, so I guess that’s kind of a win?

This malt has a nutty character with a very mellow smoke aroma. By mellow I mean the strength of the smoke is similar to the smell of clothes the day after being near a campfire. It’s present but not harsh or overpowering. This should make an awesome beer.

Posted by jfdyment on March 2, 2020 in Pre-Industrial malt, un-aerated malt

After brewing with my aerated malt and the un-aerated malt I’ve come to realize that there is a major flaw with this comparison. So much so that I had decided not to post the results until I redid this experiment. Then I received some enthusiastic words of encouragement from some readers who were waiting for these results, thanks, Arman and Graham! I did learn something while doing this so I think it is worth posting but keep in mind this will be the first of many comparisons of aerated an un-aerated malt. Here’s part 1

Malting the aerated barley at the same temperature as the un-aerated did prove that it was the un-aerated steep that delayed the growth, or that aeration speeds up growth, but in order for the faster growing aerated malt to develop enough enzymes in its short germination period it needs warmer temperatures in the 15-18C 59-64F range and not the 7-12C 45-54F range. According to Briggs “Steep aeration reduces alcohol production and often leads to subsequent more vigorous germination and  respiration during the germination phase.” (pg 209) Visually the roots were not as long as I normally see them (as expected due to the cold temperatures) but the acrospires seemed long enough and the starch was pasty so I was duped into thinking it was modified when it really wasn’t.

When making the beer I had to mash the aerated malt for 3 hours and it still hadn’t fully converted (using an iodine test). The un-aerated took 1 1/2 hours to fully convert. These were small 2 gallon batches, the recipes were the same, fermentation temperatures were the same but they were brewed on different days.

Another tell tale sign of under-modification in the aerated malt was a stuck sparge. So not only did I have to decoct this mash a couple of times to maintain the temperature but I had to transfer the whole thing to a large strainer and batch sparge it. Hands down, this was my most disappointing brew day ever. The un-aerated ended up producing more wort at a higher gravity.

So what I learned is that aerated malt is a different animal (more vigorous) with different needs (higher germination temperatures) than un-aerated malt.

Taste test: In a nutshell, the un-aerated had a richer maltier flavour but lacked body, the aerated had more body less flavour. Again the brewing of these two beers was so varied that it’s not a good representation of the malts characteristics. What we have is a very well modified malt and an under-modified malt. One theory as to why an un-aerated steep produces a more well-modified malt is that not only is it given more time to develop but that the endosperm is more fully saturated. (See Briggs, Malts and Malting pg 95-96) During an aerated steep the barley often chits even before the steeping is over. When the grain chits, water is absorbed through the embryo faster, so the grain may reach the target steep weight but the endosperm may not be as consistently saturated as a grain that does not chit during the steep. This may also make germination more consistent with the un-aerated malt. The pictures show these traits quite well. The aerated malt is more cloudy and has more head whereas the un-aerated is clear and loses

The pictures show the modification traits quite well. The aerated malt is more cloudy and has more head whereas the un-aerated is clear and loses it’s head quickly. I’m really looking forward to trying this experiment again and I’ll also compare it with store bought malt. 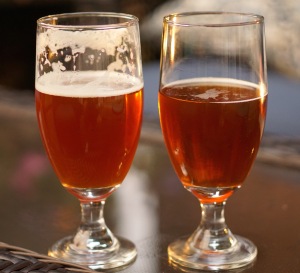 After tasting Aerated on left, un-aerated on right 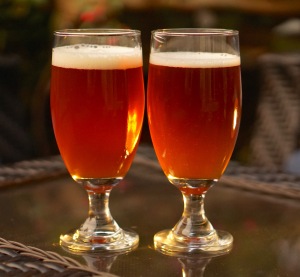 Some clarification on the history of air rests in malting

I thought I’d have to dig through a bunch of old texts to find out when the inclusion of air rests in steeps started. The only mention of it in any old text that I had read so far was in Henry Stopes Malts and Malting An Historical, Scientific and Practical Treatise 1885. On page 332 he describes the newly adopted practice in Bohemia of Steeping for 24 hours followed by a 24 air rest and then a shorter steep of 8-10 hours (the date on the citation for this is 1874) He also describes the use of spray steeping on the continent.

As it turns out I didn’t have to look much further than this article by D.E. Briggs: Accelerating Malting: A Review of Some Lessons of the Past from the United Kingdom. 1986. In this paper Briggs describes the many methods used in the past and present to accelerate germination rates. Listed are methods such as abrasion to light crushing, low moisture squeezing as well as warm steeping and using additives like hydrogen peroxide and giberellic acid.

Any summary I could write about this article wouldn’t do it justice so I won’t try, but here are just a few interesting points  in a very, very brief summary form.

Briggs does confirm that air rests were adopted by maltsters in Germany in 1875 but also mentions the traditional Norwegian practice of steeping  barley in sacks submerged in streams and taking them out at intervals to drain and rest. Check out this old footage of traditional brewers in Norway from this awesome blog Larsblog shared by my friends at Spowtmalt.com  I’m not sure what they’re saying but it’s fascinating to watch.

Interestingly Briggs notes that the practice of air resting fell out of use in the U.K. in the early 1900’s but was re-introduced in the 1950’s  when it was recognized that an air rest after the grain had reached a water content of 35-37% overcame water-sensitivity and the grain could then be steeped again to a final moisture content between 41-46%

There is also a great description of how early chitting in the grain, which occurs with spray steeping and to a certain extent with air rests can affect the water uptake due to the more rapid absorption of water from the embryo over the starchy endosperm once the grain chitts. This can leave the inside of the endosperm dry even while the overall target moisture content is reached which can be detrimental to modification.

Briggs concludes by stating that despite all the new techniques and methods utilized in modern malting that each new batch of barley brings it’s own problems in production. He suggests that malt could be made more rapidly if there were a better understanding of various aspects of immaturity and vigor or dormancy. Also that further studies need to be done to improve methods that characterize the degree of maturity in grains. As well it would be advantageous to find methods other than prolonged storage to hasten grain maturation.

This article is well worth reading and sheds a lot of light on the recent history of the steeping process.

Posted by jfdyment on February 22, 2017 in History, un-aerated malt

Ok, mind blown, and I don’t know how I’ve missed this key piece of information. Sometimes I feel like the world of malting is shrouded in so much mystery that you have to be a detective to figure it out. The data in the Scotch Bigg Report provided the biggest piece of the puzzle that was missing for me: that long germination times are only possible with un-aerated steeps. The report gives us actual recorded steep times, which are shockingly long 40-118 hours. What may be even more important was the observation in the report that some maltsters only changed their steep water once or twice and some not at all. But how is this possible? Most texts I’ve read state that the grain will die if submerged for over 24 hours, I’ve told people this myself (my apologies). In fact, I believe it’s only been in the last 150 years that aeration has been used in the steeping process – but I’ll have to do some further investigating to confirm this. In part one of this project, I do a side by side comparison of malt steeped with air rests and malt steeped for 72 hours without. Results in a nutshell: the un-aerated tastes better, but I haven’t brewed with them yet, that’s part two. One factor that may skew the comparison is that I malted these barley samples at the same temperature, which was lower than I would normally malt aerated barley – this may have affected the flavour of the aerated malt. This will be addressed in part three – how does historically malted barley compare with modern malt (malted at warmer temperatures – 15C, 59F)

Posted by jfdyment on February 12, 2017 in History, un-aerated malt

Cultivating fermented food and drinks one jar at a time

They Who Drink Beer Will Think Beer

Law librarian, brewer's wife and mom of three girls (not necessarily in that order)

From Plants to Beer

The real route of beer

My Own Home Brew

My record and experience in brewing

Romping around the world and Nguyening since March 2014.

Gardening hops, grains, vegetables, and brewing beer in South Louisiana. And they said it couldn't be done....

Brewing small batches of craft beer in a 650 sqft apartment

The homebrewing adventures of a Boston sports fan

If Not Now, When?